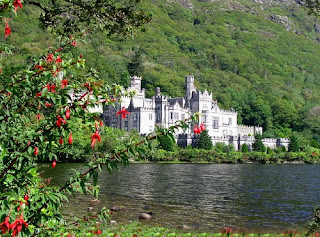 I knew there is a city called Dublin from one of my text books when I was a middle school student. In 1990s, news about North Ireland had often been in the headlines of newspapers because of the conflict between the nationalist community and the unionist community, especially about its Sinn Fein party. From then on Ireland has become a mysterious country in my mind. That has driven me to learn about Ireland and Irish people.

As the third largest island in Europe, the population of Ireland is just approximately 6.2 million people. Of them 4.5 million live in the Republic of Ireland and 1.8 million live in Northern Ireland. But the most interesting thing is that the largest number of Irish people live in the United States—about ten times more than in Ireland itself.

For a comparatively small island, Ireland has made a disproportionately large contribution to English literature and world literature. So far four people have won the Nobel literature prize. One of the famous ones is George Bernard Shaw. He wrote more than 60 dramas. He is the only person to have been awarded both a Nobel Prize for Literature (1925) and an Oscar (1938), for his contributions to literature and for his work on film respectively. I was inspired by what Shaw said, “Imagination is the beginning of creation. You imagine what you desire, you will what you imagine and at last you create what you will.

Ireland is a sacred place in which great writings and writers are born. It is a place which can spark your inspiration about literature. On one rainy day, when you are walking with an umbrella in your hand in one of small lanes in Dublin, in the sound of church’s bell you can feel the rich literature deposits created by Irish great masters.

Let’s end my writing with one of Yeats’ poems.


WHEN YOU ARE OLD

When you are old and grey and full of sleep,
And nodding by the fire, take down this book,
And slowly read, and dream of the soft look
Your eyes had once, and of their shadows deep;

How many loved your moments of glad grace,
And loved your beauty with love false or true,
But one man loved the pilgrim soul in you,
And loved the sorrows of your changing face;

And bending down beside the glowing bars,
Murmur, a little sadly, how Love fled
And paced upon the mountains overhead
And hid his face amid a crowd of stars.
Posted by Andrew YU at 11:02 PM

Email ThisBlogThis!Share to TwitterShare to FacebookShare to Pinterest
Labels: Writing